Living in Singapore, the second most densely populated country in the world, it is nearly impossible to 'get away', a problem which I unconsciously solve by my large imagination and ability to block out views I do not want.
All around the island are hundreds of container ships.
Any island near 'my island" is developed into either touristy places where music can be heard constantly, or into industries like the so called "Shell (the company) island" or 'the garbage island', where Singapore, because of lack of space, dumps and processes it's millions of tons or trash. The horizon is basically industrial. Once these were beautiful tropical idyllic islands in a clean, blue sea.
By nature, I tend to look away from all this, and focus on beauty. The real world is often not of my liking.

Perception.
I create my own world that way.

This is resulting in a body of work; video, printmaking, large scale drawings and photographs.
In this body of work, I play with the idea of paradise, storytelling, exoticism, sanity-insanity, a voyage into discovery where I, as a naturalist, discover a world that is fake, and thus, so does the viewer. The rocks are hollow and are falling apart. The sand is imported. The rocky shore are rows of stones neatly set side by side. The island isn't isolated at all. On the contrary. The man made paradise (man as creator, acting as God) is a failure.
​Utopia - dystopia..
But could you say that it is part of evolution still ? This urge to create ? Man as creator ?
Darwin writes in "the Voyage of the Beagle";
"Man at last has been enabled to understand his own role, his own true position in nature and in the world we live in." 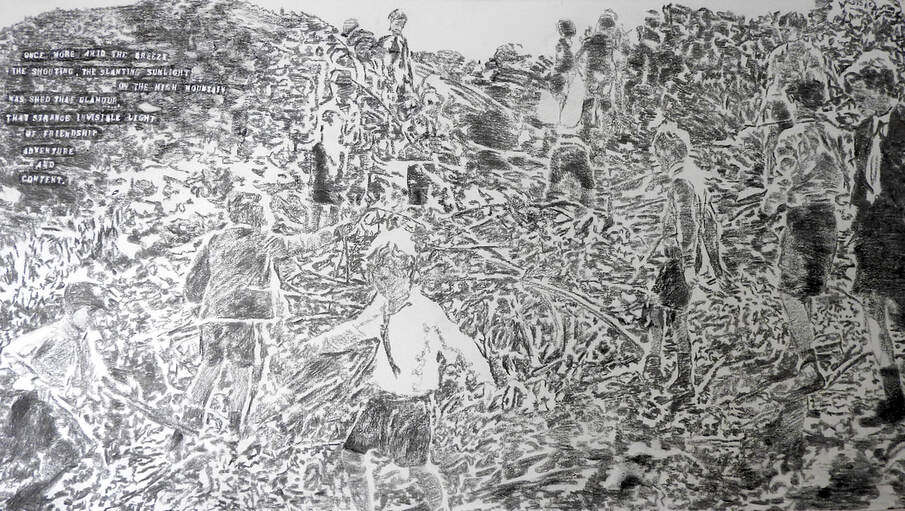 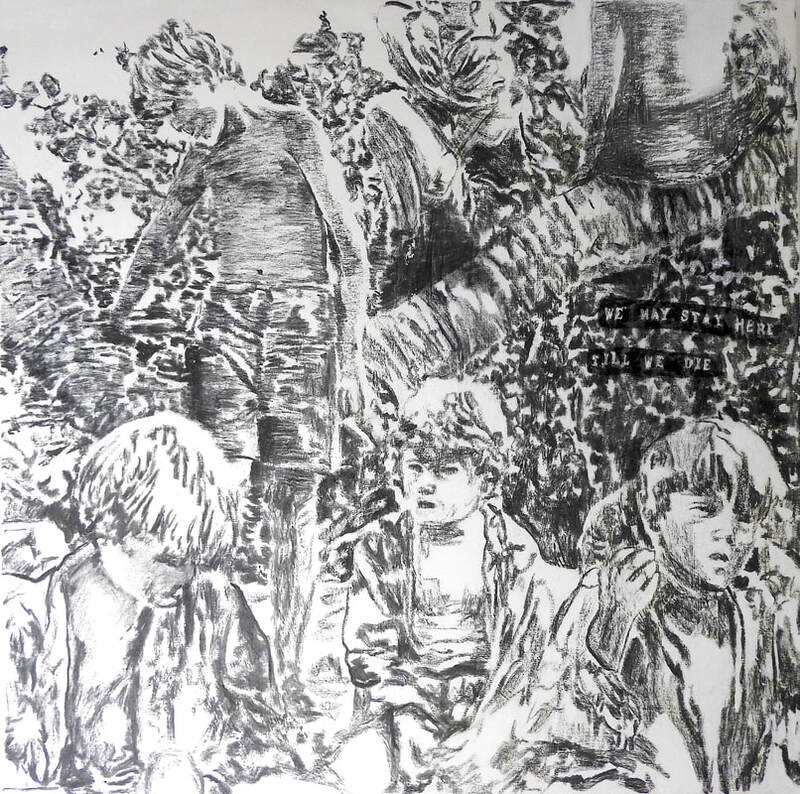 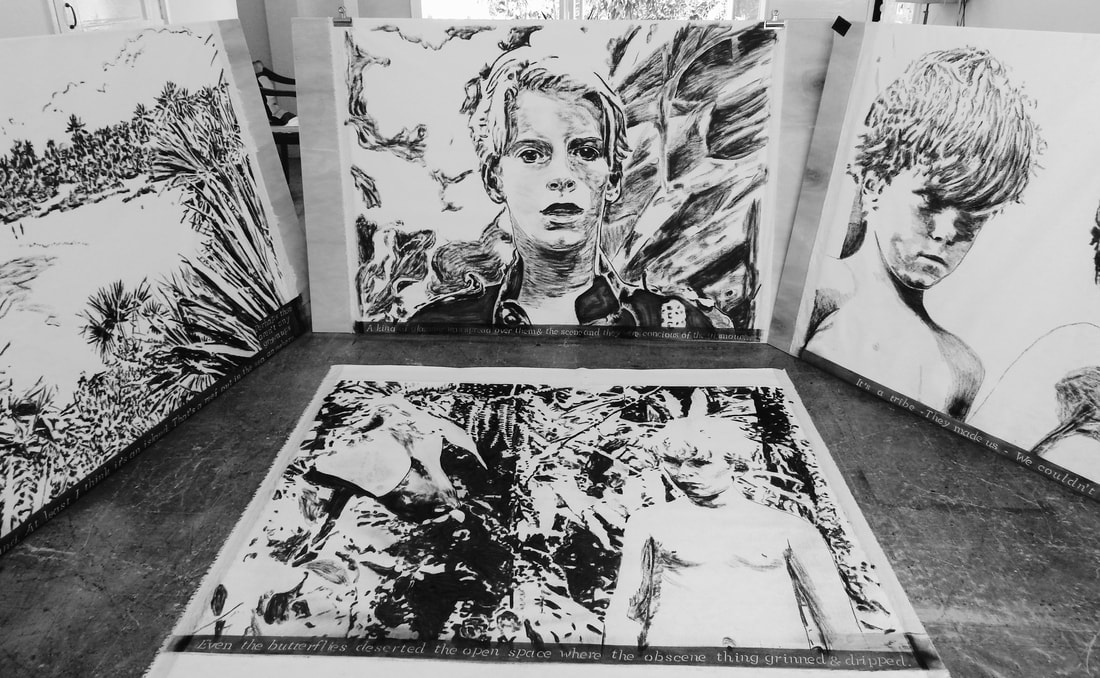 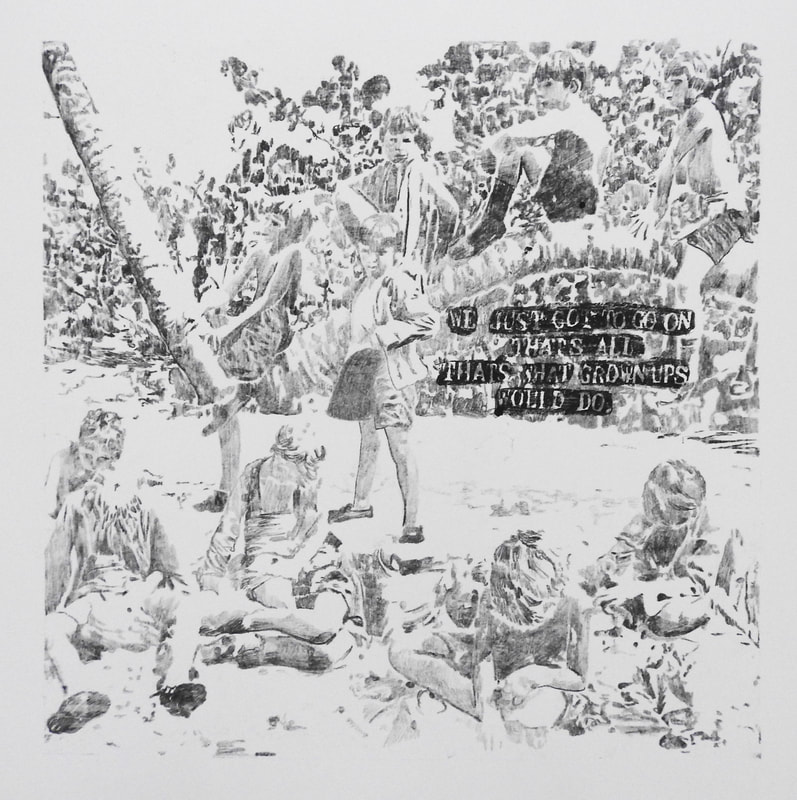 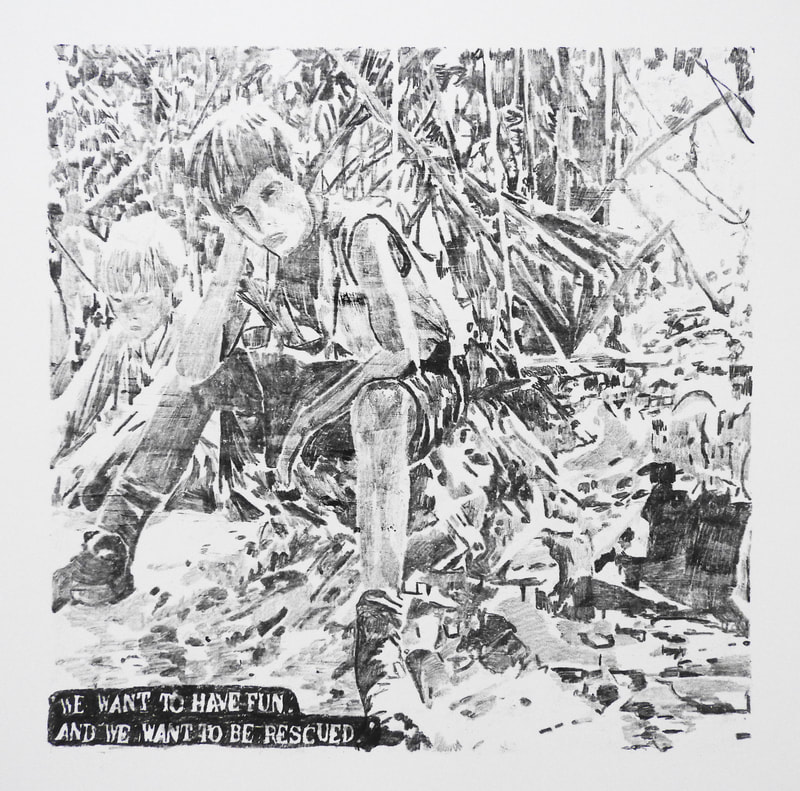 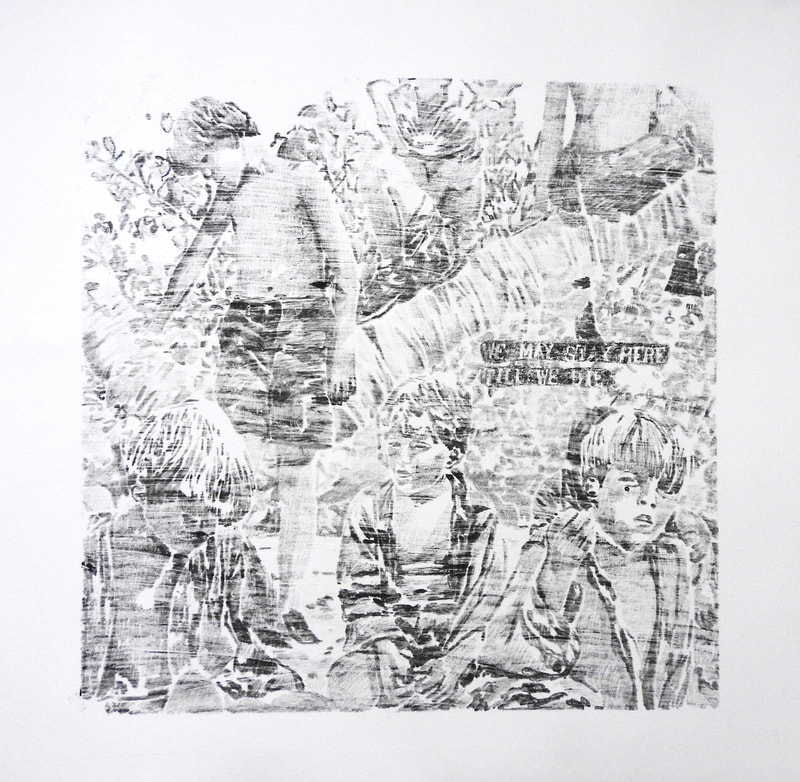 The island series.
Monoprints on paper, 2019
40 x 40 cm
​
In this series of prints, which are part of the island series; existing so far of large scale charcoal drawings and a video work which I am currently working on, you see film stills of the movie 'the Lord of the Flies'. The titles on the works are directly taken from the novel "Lord of the flies', by William Golding.

The titles/captions play a big role to guide the viewer into how to read the work, provide a context, but also cause confusion. The combination of what you see and what you read is giving you information that confuses slightly, but just enough to make you wonder what really happened, and makes you have another, better look and see things in a different perspective.
​

the island
video
​(work in process) 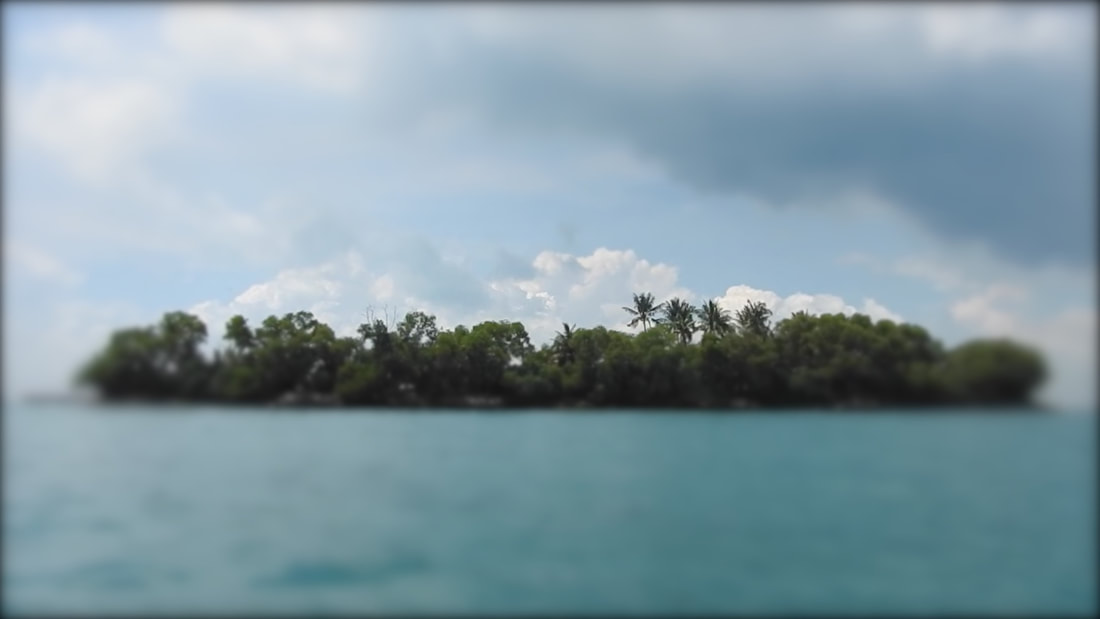 ​https://vimeo.com/user9437157
In this video work, I play the main character who is lost at sea and washes up on this uninhabited island. The texts spoken by me, are texts taken from novels and films; Robinson Crusoe, Lord of the Flies, the Blue Lagoon and Pincher Martin. It's a video piece that shows the character's fluctuation between sanity and insanity, between reality and unreality. 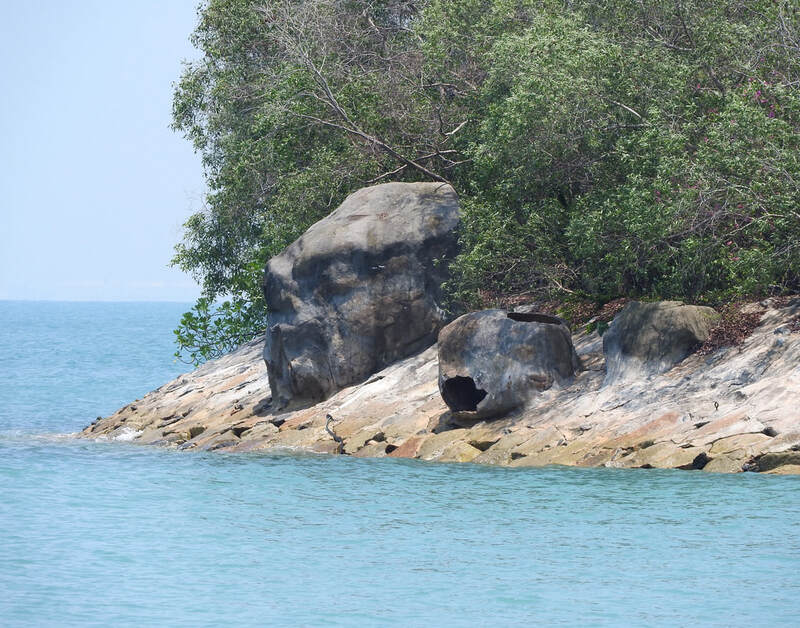 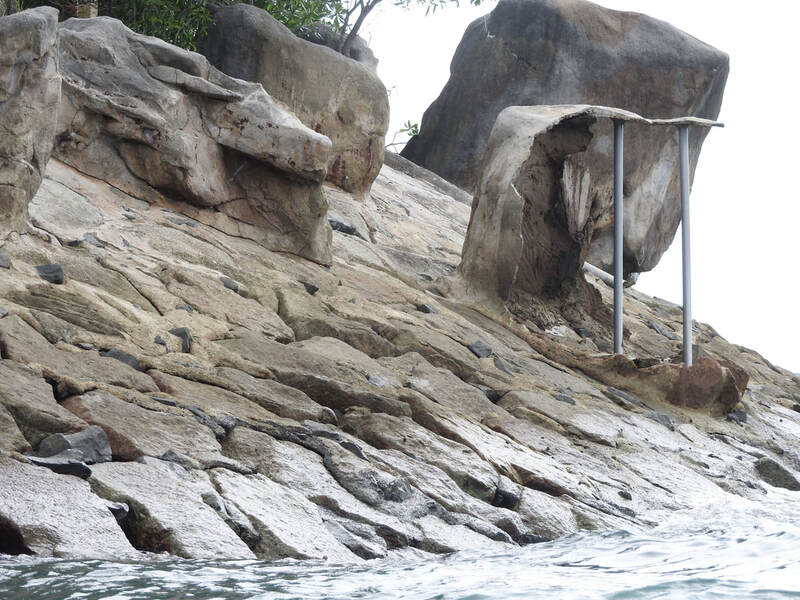 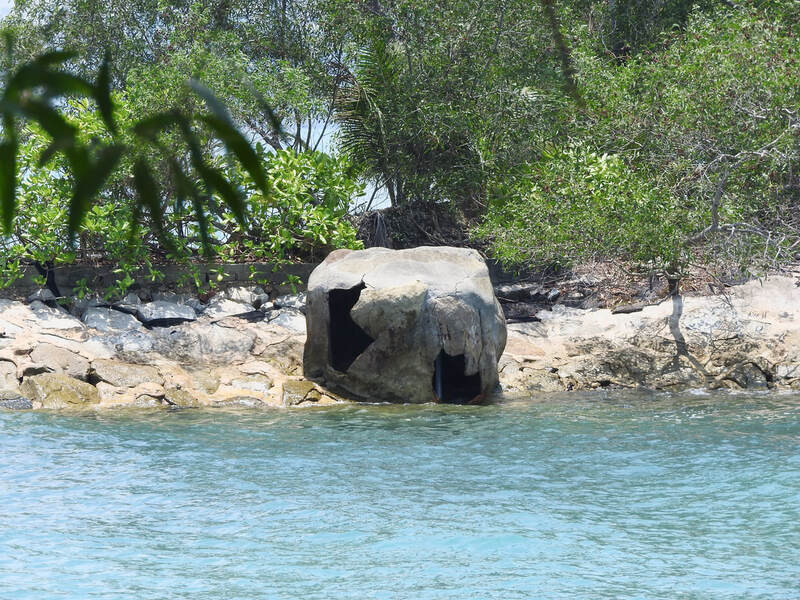 He who created the original paradise, promised to restore what was lost
Pulau Belakang Mati - Sentosa
2018 A deserted tropical island. A setting which is utopian.  The idea of paradise on earth is one that originates back to the Bible; the Garden of Eden before the fall of men.

-The title also refers to the idea that 'paradise' is a man made concept. Paradise is often seen as a tropical deserted island where all is good and innocence prevails.  Man here takes the role of "God" by creating paradisiacal landscapes, with artificial materials, which over time collapse (paradise found-paradise lost) and will most likely be restored over time.
​ 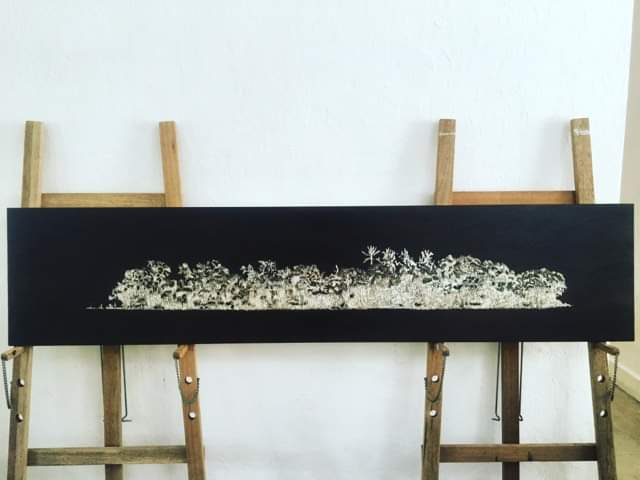 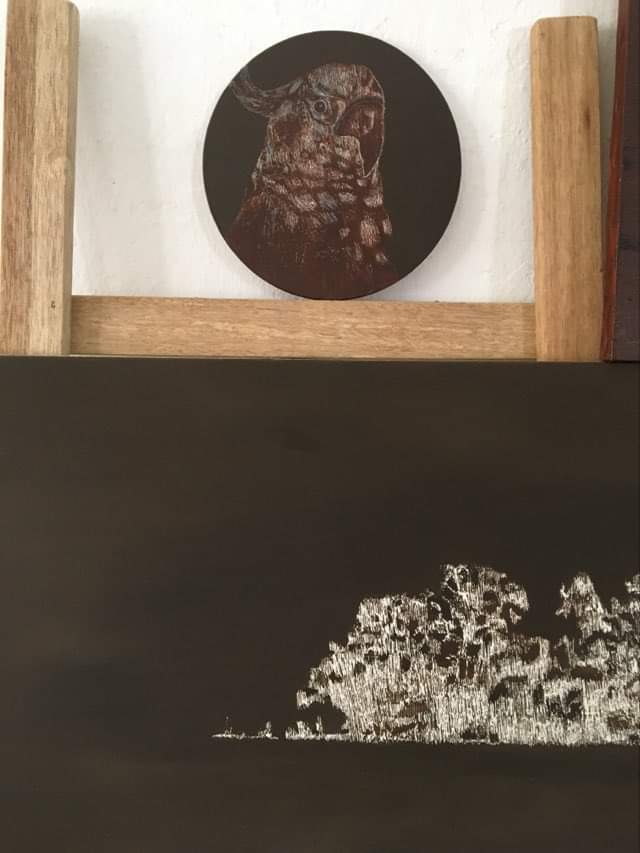 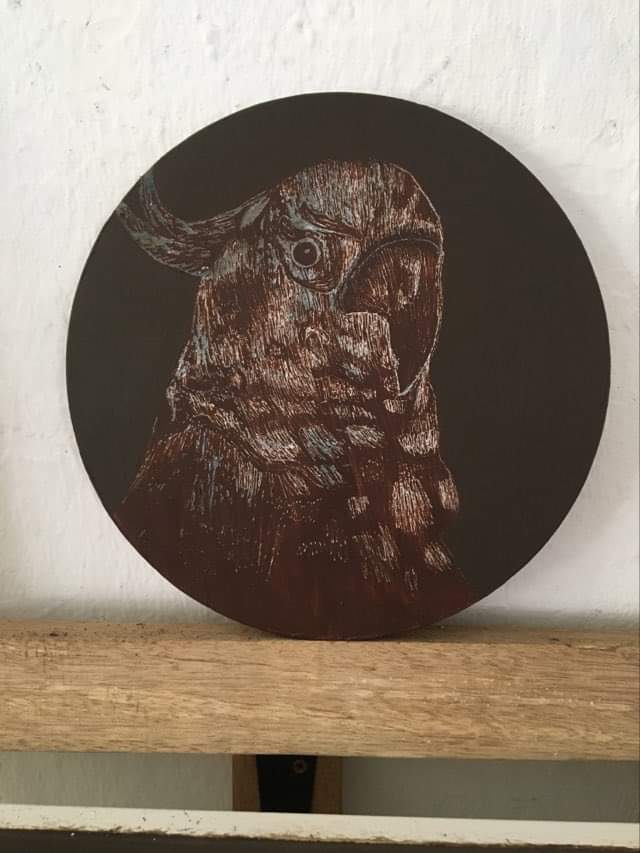 Natural selection;
‘Little imagination is required to fancy that so light and delicate a body must be tenanted by some wandering fairy spirit.’
(from Charles Darwin; The voyage of the Beagle.)
scratching, oilpaint on round board.

Natural selection;
‘The whole island with it’s sloping border, was adorned with an air of perfect elegance; the scenery, if I may use such an expression, appeared to the sight, harmonious.’
(from Charles Darwin;The voyage of the Beagle)
scratching, oilpaint on board.

Both works refer to Charles Darwin’s research on the theory of evolution. The long oil-paint wooden panel, has ‘my paradise island’ depicted, the little round one has a bird on it, a yellow crusted cockatoo.

The series actually, truly shows a fake island (man made and deliberately devoid of background; no industry and ships are to be seen), and a yellow crusted cockatoo, an introduced bird species.

Yet, we’d perceive this imagery mostly as harmless, peaceful and even paradisiacal. You think you see Eden, but what you see is a troubled world, out of context, where things are not always as it seem, where that pretty cockatoo might actually be a thread to indigenous wildlife.

Yet, as life evolves always, adjusts, evolution continues…one could question if this is evolution too ?
The artist as amateur naturalist, wondering if man can act as God, (by creating an deserted paradisiacal island) aiming to create Eden. If ‘man made’ is part of evolution also, as man is part of nature.

The titles are from Darwin's book 'The voyage of the Beagle'.
I call it 'Natural Selection', a reference to Charles Darwin's research on the theory of evolution.